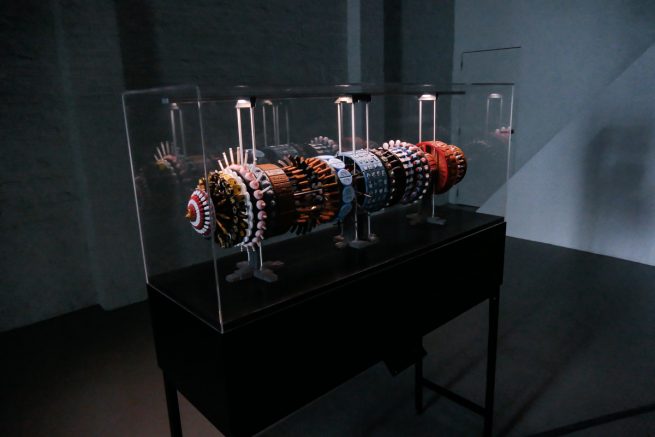 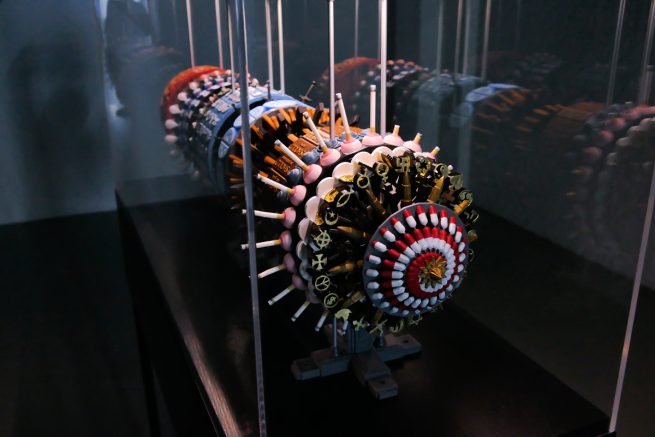 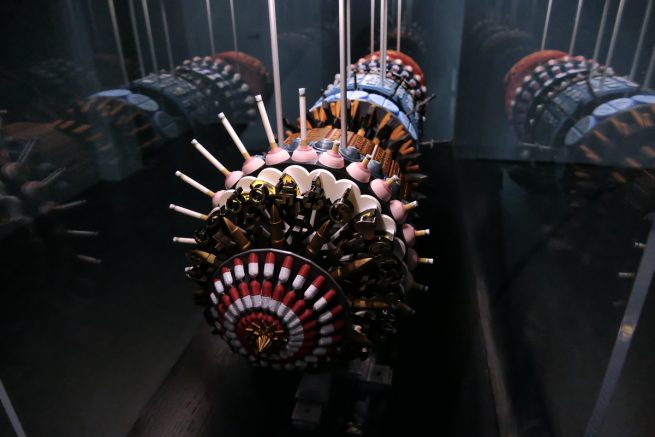 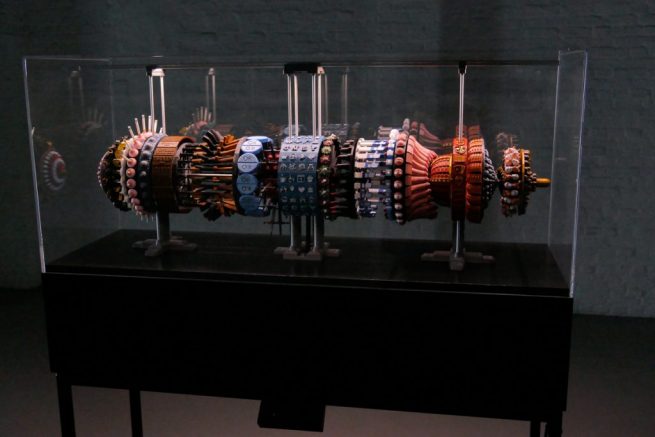 A classical display cabinet, black with a gleaming, transparent cover, with a … what? It’s hard to tell because it’s dark. Is it a limb on a spit? Or something industrial, like a horizontal drill, a lathe, an exposed aircraft engine? Or even dangerous, like a missile? Ah…look, there’s a button. Press it.
Enraptured by the Pixar zoetrope that he encountered while he was doing his usual online ‘research’, Hoogerbrugge remained as motionless as a skinless eye for a day or two and then, making the most of what remains of his neuroplasticity, embarked upon assimilating yet another new set of algorithms in his never-ending quest for novel outlets for his unstoppable artistic urges. Ergo, a 3D printer.

A whine… The spiny cylinder starts to rotate, picking up speed. Twenty rings rotate on a horizontal axis, each with their own sequence of animated models moving fluidly or thrusting and retracting, advancing and retreating, opening and closing… The whine settles to a thrum and the strobe light kicks in. As the animations snap into focus, it all seems to make sense…for a moment….

The speed control has a range of between 12 and 24 frames per second. Decelerating the rotation allows viewers to deconstruct the object and the artistic process, and to get to grips with the illusion, with the realisation that the sensation of movement is occurring inside his or her own head. Some of the animations in Limbo Lottery are designed to function at lower speeds anyway, so not playing with Hoogerbrugge’s knob means less fun. Moreover, as a stationary sculpture, it is perhaps more powerful than when it spins like a carousel. Which is another reason why Limbo Lottery is a zoetrope that rotates on a horizontal axis – other 3D zoetropes are generally round and resemble elaborate birthday cakes – here, the horizontal format eliminates problems relating to scale and especially lighting.

Limbo Lottery was designed from the outset as a three-dimensional object. Each model figure was 3D-printed using polylactic acid (PLA), a biodegradable and bioactive thermoplastic polyester derived from renewable resources such as corn starch, tapioca roots or sugarcane. After printing, the components were hand-painted and assembled into their peculiar shapes.

Limbo Lottery is the first (three-dimensional) object to appear under the rubric March of Folly, which, like Hoogerbrugge’s Grande Fête des Voyeurs, is an overarching theme that allows for many different artistic expressions. Limbo Lottery is a saturation experience. The abundance of iconic objects, symbols and logos; the complexity of the animation of each of the individual components; and the richness of the colour palette, drawn from Hieronymus Bosch, make this work a true feast for the eyes. Hoogerbrugge’s selection of objects here are metaphors for his recurring themes/subjects (read: obsessions), and as usual provoke each viewer’s individual associations with those objects: when you see a cigarette being sucked into a nipple, you will hopefully have different associations from me.

Hoogerbrugge’s works highlight the absurdity of our refusal to acknowledge that we are nothing more than monkeys dressed in silk, that our distorted morality has rendered us incapable of guiltlessly enjoying the temptations that disrobe (and sometimes even have to flay) themselves before us, that we are hypnotised by the black mirrors that we hold in the palms of our hands that reflect ‘our civilisation’. Some people cop-out, kick back and complain; others, like Hoogerbrugge, engage and try to explain, even if it is only to help themselves better comprehend why we willingly remain on this accelerating, directionless conveyor belt that lacks guard rails, especially when no one has been issued safety guidelines, a life raft or even or a crash helmet. What is certain is that as a species, we continue to hurtle towards an unknown future in our own (handheld) March of Folly. We might be able to slow it down, but it could be a March that only stops when someone pulls the plugs.

Thaumatrope, phenakisticope, stroboscope discs, phantasmascope, dædaleum, stereophoroskop, mimoscope: all of these wonderful names were given to contraptions that animated static images and preceded the definitive zoetrope.

While attempting to create new toys or experiences to enchant audiences at magic-lantern shows, Victorian-era inventors stumbled upon the principle of ‘persistence of vision’, the optical illusion whereby a sequence of successive static images blend within the human mind into a continuous moving image, based on the phenomenon that anything we look at leaves an afterimage on the retina for a few seconds. Early scientific toys such as those mentioned above (and below) that generated animated scenes and even today’s cinematic techniques all rely upon this ‘persistence of vision’.

The earliest of these devices, the thaumatrope, consists of a small disc held by pieces of string. Each side of the disc has an image that seems to superimpose onto the other when the disc is spun: an iconic example is a bird on one side of the disc and a cage on the other – spin the disc and the bird looks like it is inside the cage. (Incidentally, Hoogerbrugge employed this technique in his pig head/human head pairing for Limbo Lottery.) Several incarnations later, in 1834, William George Horner proposed a device, the dædaleum, which allowed several people to view the moving images simultaneously. It consisted of ‘a hollow cylinder… with apertures at equal distances… round the edge of a revolving disk. Any drawings which are made on the interior surface in the intervals of the apertures will be visible through the opposite apertures…’. Spinning the drum made the images move in succession and when viewed through the slits, appear to be animated. This was a perfect medium for satire/caricatures, and no doubt, pornography. Strangely the dædaleum was almost forgotten for over 30 years until 1887, when it was patented as the ‘zoetrope’ in the US by William Ensign Lincoln, whose version improved on its predecessors by having the viewing slits above the pictures, allowing for the use of easily replaceable paper strips with images. The word ‘zoetrope’ is derived from the Greek word zoe, which means ‘life’, and tropos, meaning ‘to turn’. It was also called the ‘wheel of life’, because this cylindrical toy created the impression of movement from static images.

3D zoetropes apply the same principle to three-dimensional models. In 1887 Étienne-Jules Marey used a large zoetrope to animate a series of plaster models based on his chronophotographs of birds in flight. Nowadays, the slitted drum has made way for a rapidly flashing strobe light, which pulses at a set rate per second, producing much clearer and sharper results. As each successive model passes the same spot, the strobing light makes it look like a single animated object. These animated objects can also be made to appear to move slowly forwards or backwards by adjusting the rotation speed so that the zoetrope is slightly asynchronous with the strobe.

Praxinoscope, Zoöpraxiscope, Kinetograph, Kinetoscope, Cinématographe, Vitascope: all of these wonderful (by this point) brand names were given to devices that followed but did not entirely displace the zoetrope – versions can still be found in toy shops today – but it wasn’t long before the medium of film superseded these as well…